We strongly object to the TWAO application as presented on four critical, distinct grounds that the proposed station design:

The forecast number of station entries and exits in 2029 (three years after opening) appears to be based on incomplete and out-of-date employment data. Forecast growth beyond 2030 is also implausibly low at 1.3% per year. Two new specialist hospitals, for children and cancer treatment, are planned for the site, yet receive no mention in the application documents. Uncertainty about the quantity of car parking provision on the CBC site is mentioned, but not reflected in demand modelling. The GCP target of reducing motor traffic in Cambridge is mentioned, but not reflected in demand modelling. The CBC 2050 Vision is nowhere mentioned, even though this has huge implications for potential future growth in travel demand. There is no mention of the impact of national and local targets for decarbonising transport and improving air quality in built-up areas, even though these will necessitate a large modal shift from cars to public transport.

Given the high level of uncertainty of future growth in both population and employment, and rapidly evolving national and local transport policies, we would expect to see the business case test the proposed station design against multiple scenarios for CBC employment numbers and modal shares for first/last-mile connections. We see no evidence that TAG Unit M4 (Forecasting and Uncertainty) has been applied.

The constrained location also makes any future expansion difficult, costly and disruptive. The high degree of uncertainty about future usage translates into high financial risk in the event that the design capacity proves inadequate during the station’s operational life. This risk has not been quantified in the application. A prudent approach would be to design the station with sufficient capacity at the outset for a high-end demand forecast (e.g. one standard deviation above the 2040 median forecast), and make passive provision for expansion in the future.

The principal (eastern) station entrance is highly constrained by the eastern busway abutment. The narrow access corridor creates an environment that will be highly conflicted at peak times, when there are large volumes of pedestrian, cycle and motor vehicle movements. Adjacent junctions with Francis Crick Avenue for the busway and station access road will create further conflicts and increase delays for people walking and cycling. Modelling for the TA shows that congestion on Francis Crick Avenue will delay buses travelling south from Long Rd.

The bus stops on Francis Crick Ave will be 200m from the station entrance. For someone alighting from the rearmost carriage of a northbound train, the walk to a bus stop would be 450m, taking seven minutes. This does not accord with the government’s Bus Back Better guidance. 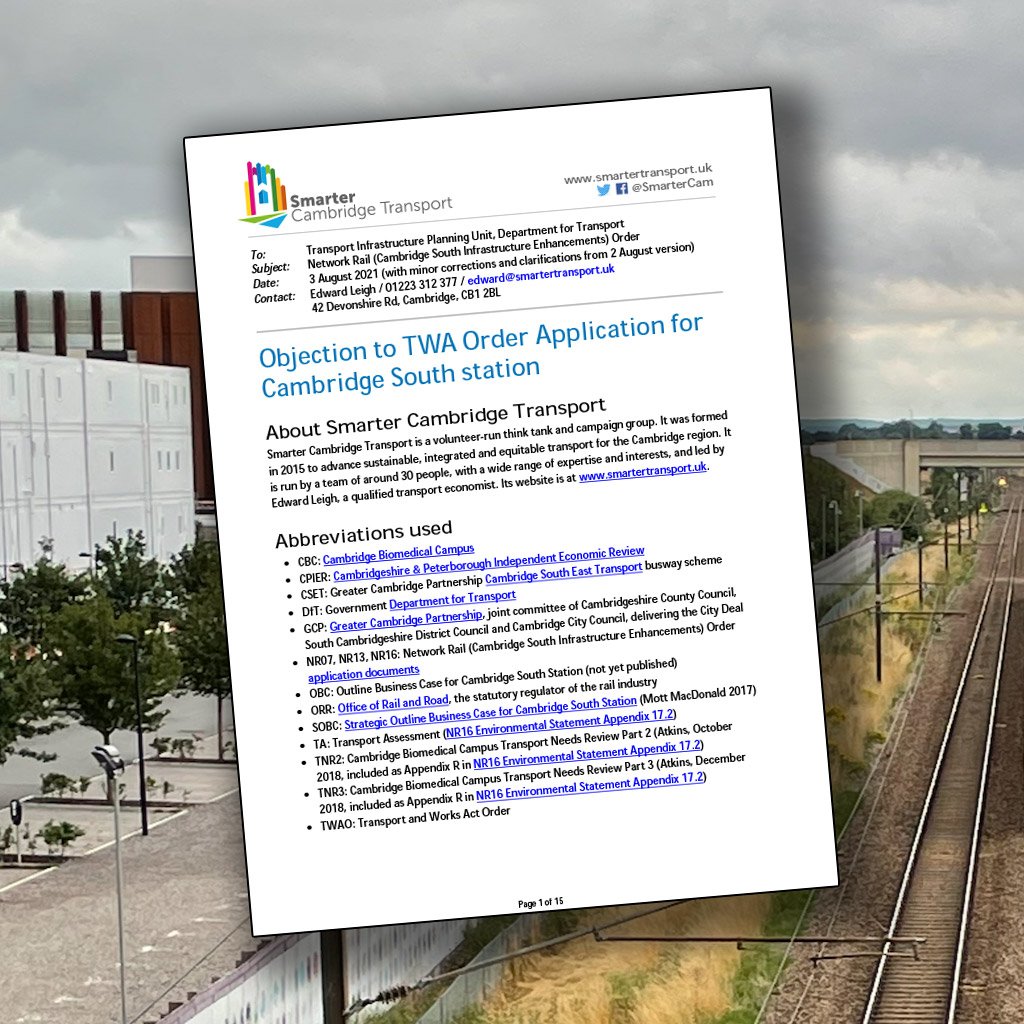