Rail and its untapped potential

Thanks to Railfuture East Anglia for their assistance in preparing this paper.

The potential of rail

Cambridge’s railway network already has a significant role in bringing people into the city, with an annual footfall of 12 million (2017/18) at both stations, equating to around 16,500 people every day. Of those, around 5,000 are commuters to Cambridge (based on the 2011 Census figure of 3,596 plus 36% growth in footfall since then). That’s around 10% of the total number of commuters into the city.

The congestion-free nature of rail makes it the public transport mode of choice for shifting large numbers of people with reliable journey times. Rail can contribute significantly to the aims of the Greater Cambridge City Deal in linking people to jobs, but the City Deal must work with the rail industry and other organisations to make this happen. Rail’s high capital costs, and delays in the current national rail capital programme (see the Hendy Report), mean that additional funding, probably from the private sector, will be essential if some of the larger projects described here are to be built within the fifteen-year timescale of the City Deal.

Why rail is underutilised

The full potential of the existing railway network is not being realised because of:

A number of organisations have published documents identifying rail enhancements, including new stations and new lines, almost all of which lack a timetable and/or funding:

This map shows a future regional railway network that includes the most beneficial and readily achievable of those schemes: 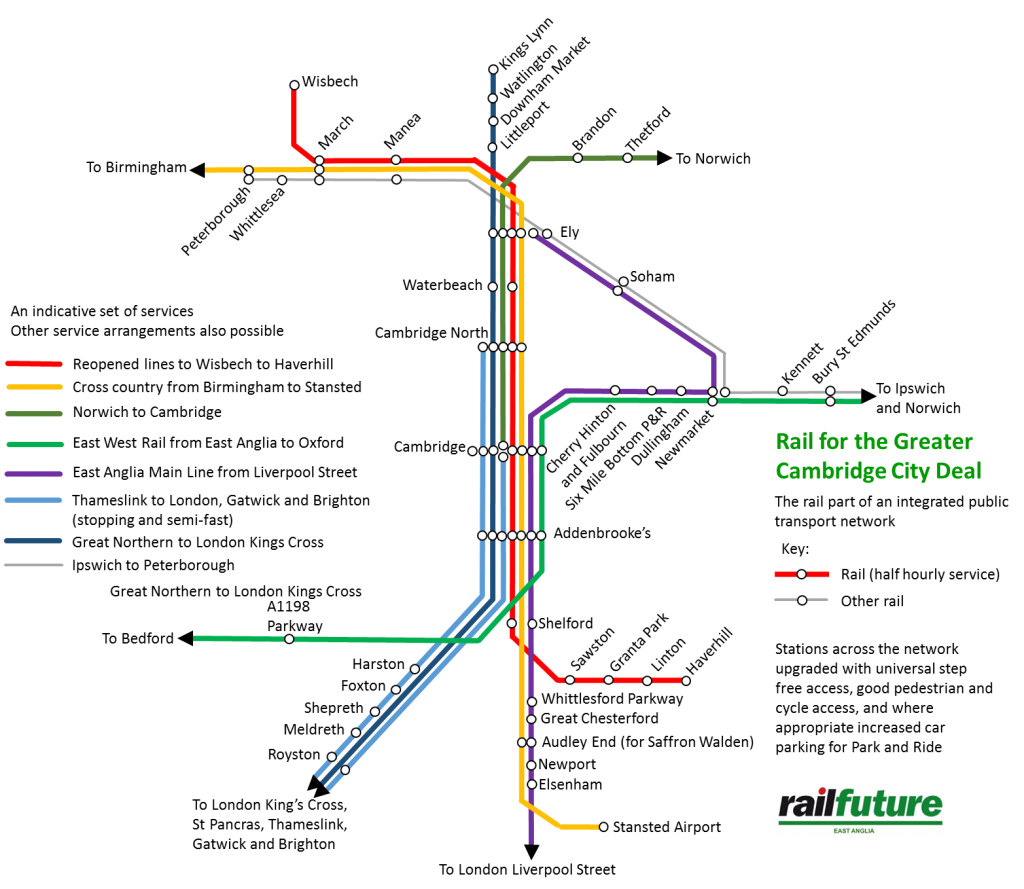 By contrast, this map shows the current network: 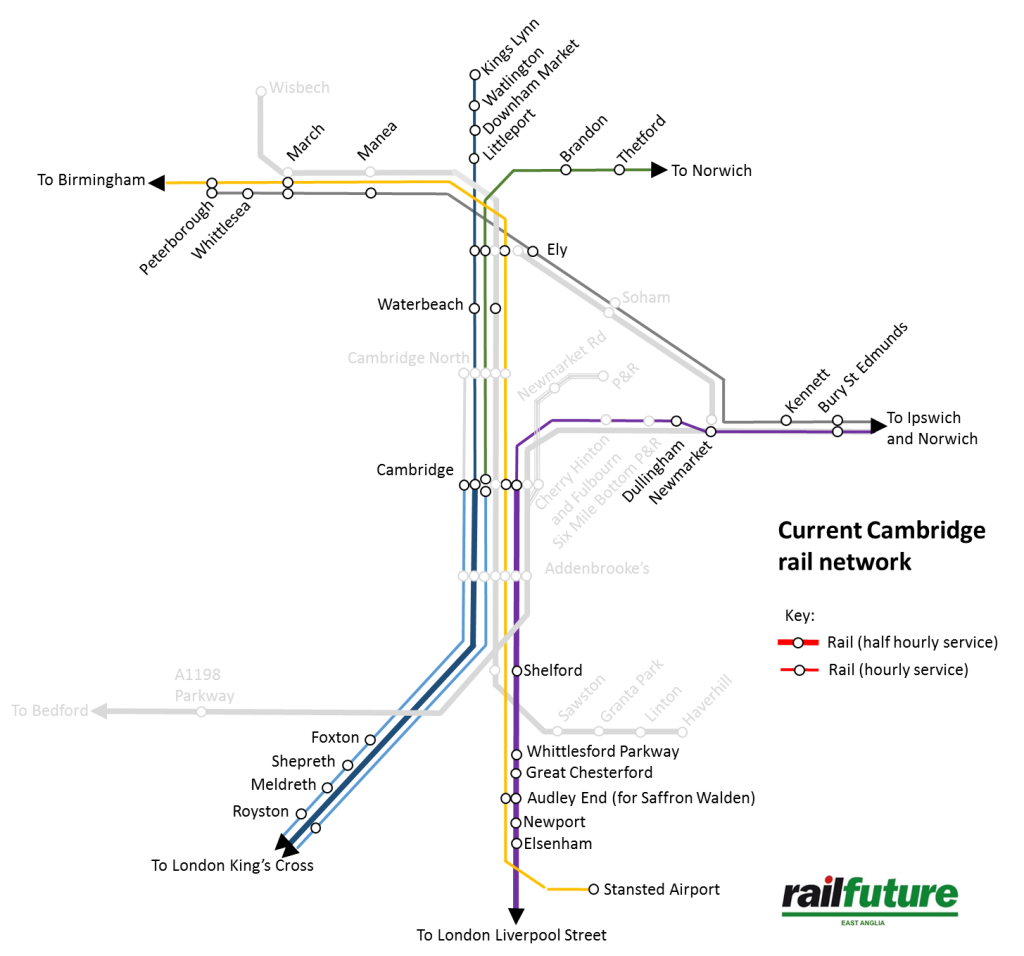 The expanded network would need to be supported by:

This is a short survey of existing stations in the Cambridge commuting area, noting positive aspects and areas in need of improvement. We have also included some new stations that would bring rail services within closer reach of large numbers of people.

The main station in Cambridge has been extensively remodelled in recent years. Further changes and expansion are needed to to keep up with growth in demand and to improve access.

The new station at Chesterton opened on 21 May 2017. It is linked to the Guided Busway to the west and will be at the northern end of the Chisholm Trail. It has 450 car parking and 1,000 cycle parking spaces. Access to the rail network is greatly improved for north Cambridge, including the various business and science parks, Milton, Fen Ditton, Histon and Impington.

The need for a station at Addenbrooke’s to serve the expanding Biomedical Campus is urgent now that AstraZeneca, Papworth and Abcam have moved in, and a new children’s hospital is being planned. In 2017, the campus was seeing over 40,000 trips onto the site each weekday. That is forecast to rise to 67,500 daily trips by 2031, based on current plans for the site. Although the Guided Busway provides a fast and convenient service from the existing station, buses will struggle to meet growing demand at peak times.

Building a station here necessitates widening the line up to Cambridge Central to four tracks, probably as part of East West Rail. However, the Combined Authority is pushing for an interim solution in which only loop tracks are added for trains stopping at this station.

This section of line is common to the Wisbech, Peterborough, Kings Lynn and Norwich to Cambridge services. Increasing rail usage will take commuters off the A10 to Cambridge.

Ely station has the largest footfall outside Cambridge at 2.3 million per year (2017/18). In many ways it is a model of how a station can support significant levels of commuting to Cambridge. There are good facilities, including a manned ticket office, interchange with bus services, and cycle hire.

The County Council has published a business case for reopening the Wisbech branch line. The cost is estimated at between £70m and £110m, with a high benefit to cost ratio if capacity enhancements are carried out in the Ely area. Linking 35,000 people in Wisbech with jobs in Cambridge with a 40 minute rail journey (quicker than by road from places much closer to Cambridge) could provide a significant boost to the Cambridge economy.

March (population 25,000) currently has a modest level of commuting to Cambridge. This could be enhanced by a much improved service with an increased frequency, late evening trains and Sunday morning trains. The Wisbech service would enhance the connectivity of this town and make it more attractive to live in, and work in Cambridge.

Manea has recently received a much enhanced rail service, now two-hourly, but this could be increased to hourly to serve the local area, including Chatteris.

Both these stations have relatively high numbers commuters to Cambridge owing to a reasonably good service. The introduction of a half-hourly off-peak service has been postponed.

This large town (population 25,000) is on the A11 trunk road and a good place for a park-and-ride site. It is hoped that the hourly direct train service to Cambridge will be enhanced to half-hourly.

A medium sized town of (population 9,500), Brandon has one train per hour to Cambridge. With a more frequent service, this could serve well as a parkway station for Cambridge commuters as the A1065 leads to Swaffham, Fakenham and north Norfolk. Footfall at this station has increased rapidly since an hourly was introduced.

Ipswich to Ely and Cambridge

The service from Ipswich to Cambridge is currently hourly, and Ipswich to Ely two hourly. Both these would benefit from a doubling in train frequency.

Soham (population 10,000) station was closed in 1965. Plans are progressing to reopen the station by March 2022, possibly as early as summer 2021. The station will also serve Fordham (population 3,000). It will be initially be served by trains running between Ipswich and Peterborough. Reinstating the chord north-east of Newmarket would enable a direct service to Cambridge via Newmarket.

Bury St Edmunds (population 41,000) has seen growth in the number of travellers to Cambridge, which is now about equal to the number travelling towards Ipswich. Improved passenger facilities on the Cambridge-bound platform and a half-hourly service will make this town very attractive for the Cambridge workforce.

This station is served with a two-hourly service alternating with Dullingham. Its large car park is however well used. The station serves the large modern estates at Red Lodge (population 4,000) on the A11, 1.5 miles to the north.

Newmarket (population 20,000) is similar in size to Ely, but has only 15% of the footfall. The station is unstaffed, has a small car park and poor facilities; and rail services to Cambridge are only hourly. Increasing rail usage by commuters and pupils at Cambridge’s private schools will relieve the A14 and Newmarket Road.

Dullingham serves the nearby village but also acts as a railhead for the surrounding area. A particularly high number of private school and sixth form college students travel by rail from here to Cambridge. This is an unsung hero of a station which keeps many car journeys out of the city.

A new parkway station would have good access from the A11 and A14 east, with a potential to relieve congestion on the A14 and Newmarket Road.

A possible location could be at the point where Fulbourn Old Drift used to cross the railway line, providing good connectivity to all three villages.

The Haverhill line, via Linton, Granta Park and Sawston would relieve congestion on the A1307 corridor, and connect a large population of over 30,000 with Granta Park, the nearby Barbraham Research Campus, Cambridge, and the national rail network.

This station serves Saffron Walden (population 15,000) and a wide area of north-west Essex. Its footfall is very high, mainly travelling towards London. It already has one of the largest station car parks in East Anglia. There is a frequent train service towards Cambridge of at least 4 trains per hour. An improved cycle path has just been completed to connect with Saffron Walden, 1.5 miles away.

A small village but has a good service of two trains per house in peak. These trains are particularly well used by employees travelling from Cambridge and elsewhere to Hinxton Hall Welcome Trust Genome Centre, and who cycle the mile or so from this station.

This station serves large villages of Whittlesford, Duxford and Sawston, as well as (rather poorly) the Imperial War Museum. A medium-sized car park serves mainly London-bound commuters. Some people cycle from the station to Hinxton and Imperial War Museum. There is a frequent service of three trains per hour.

This station is served by a good peak service of at least two trains per hour and is seeing increased footfall. There is no parking provision.

The service from Royston to Cambridge, running parallel with the A10, serves a population well in excess of 25,000. Overcrowding and low frequencies (two four-carriage trains per hour at peak times) are suppressing demand. The Thameslink upgrade will bring longer trains and a minimum of four trains per hour, which should improve matters, but current plans do not guarantee a half-hourly, all-day service to the intermediate stations (Meldreth, Shepreth and Foxton).

The East West Rail proposal is to re-establish a rail line from Bedford to Cambridge, as an extension to the already agreed reopening from Oxford to Bedford. The first section, from Oxford to Bicester, opened in autumn 2015. The earliest likely completion date for the Bedford–Cambridge link is 2024.

Two route options are currently being considered from Bedford:

A northern route via St Neots and Cambourne would provide the greatest economic benefit to Cambridgeshire. Planned housing developments in St Neots, Cambourne and Bourn Airfield (totalling 8,700 additional dwellings), will add considerable demand to the road network. A rail line would provide a fast and convenient alternative to driving, relieving congestion on the A1303 (and likely future congestion on the A428, once it is dualled between the A1 and Caxton Gibbett), and direct access to two of the city’s major employment centres: Addenbrooke’s and the Science Park.