It is absolutely essential that all ‘stakeholders’ are involved continuously from the earliest stage in the design of the station and access, and not only through formal consultations. The collective local and professional knowledge available should be treated as an asset, not an obstacle in this process! Consultees should include at least:

Co-funding opportunities should be explored with the local authorities and all occupants of the Biomedical Campus to ensure that the station is highly functional and beautiful with well-integrated access by foot, cycle and bus.

This location is most central to the Biomedical Campus. The route to the Addenbrooke’s entrance off Keith Day Rd is relatively direct. There is potential to create a highly efficient multi-modal interchange at this location if the station were built over the railway lines, on a level with a rebuilt and widened busway bridge. In this way it would be possible to locate on the same level as the station entrance, with direct access from the east and west:

This location offers few obvious advantages over Option 1, with poorer connectivity to most of the Biomedical Campus and for buses.

This location offers few, if any, obvious advantages over Option 1. Converting the Shelford cycle/footway to an all-vehicle access road could create conflicts not dissimilar to those experienced at Cambridge station.

It is unclear from the consultation what the design capacity for this station is intended to be. We believe that the minimum design capacity should be 9 million entries/exits per year.

The forecast in the Biomedical Campus Transport Needs Review Part 2 is for 67,500 person-trips entering the Campus in 2031. That equates to 135,000 trips/day in either direction. Over 253 working days, that is 34 million trips/year. No estimate is given for weekend traffic, but if we assume this is 20% of weekday traffic (principally hospital staff, visitors and some outpatient appointments), that adds another 3 million trips/year, giving an annual total of 37 million.

The Greater Cambridge Partnership (GCP) has an objective to reduce motor traffic by 10–15% on 2011 levels, which equates to 25% on current levels. A reduction by that amount in the 28,475 one-way annual car trips recorded in 2017 would require a further 3.9 million car trips to be made by other modes.

We have assumed that there is limited scope to increase foot access to the station beyond the 62% growth already envisaged. We have also assumed that there is more scope to further expand bus patronage than cycle usage because of the wider geographical reach of buses. We have therefore allocated the mode-shifted trips 50% to rail, 30% to bus and 20% to cycling. This yields the mode splits shown in Table 1.

Table 1: Mode splits of trips to the Cambridge Biomedical Campus

We believe this figure should be treated as a minimum capacity for Cambridge South station. It is likely that future policies addressing the climate emergency will in fact require a larger mode shift from cars to other modes in order to reduce energy usage and associated carbon emissions.

As the vast majority of movements to and from the station are likely to be by foot and cycle, access routes on the east and west must be wide, with clear separation of modes to minimise conflicts.

Figure 1 illustrates how the busway bridge could be rebuilt with sufficient width to accommodate the busway, bus bays for services in both directions, and a wide pedestrian area to access the station. The station building would sit above the tracks, fronting northwards onto the pedestrian/bus overbridge.

As a relatively high proportion of the people making the approximately 600m connection between the station and Addenbrooke’s Hospital are vulnerable or have reduced mobility, great care must be taken in designing the pedestrian route. At a minimum it should be covered, and ideally enclosed to make it weather-proof and comfortable.

Consideration should be given to elevating the walkway above Francis Crick Ave and Robinson Way, and possibly to including a travellator, which could reduce the number of shuttle buses needed to meet peak demand.

Cambridge South station will be a key bus-rail interchange for local buses conveying passengers from Queen Edith’s, Cherry Hinton, Teversham, Fulbourn, Trumpington, Grantchester, and further afield. It will also need to be served by local shuttle services from the Biomedical Campus (in particular for those with limited mobility), Trumpington Park & Ride and possibly also Babraham Park & Ride.

It is therefore essential that sufficient space is provided for at least three bus bays in each direction, waiting areas and pedestrian access to the station entrance that conflicts minimally with bus and cycle movements. Provision will need to be made to enable buses to turn around quickly either side of the bridge.

There is a requirement for very high capacity for cycle parking – potentially built out in phases. Utrecht in the Netherlands now has 12,000 cycle parking spaces at its main station. It is reasonable to expect that something like this number will be needed across Cambridge’s three stations within ten years. (Cambridge station currently has around 2,800 spaces, and Cambridge North, 1,000.)

Figure 1 illustrates how the cycle access could be via a separate bridge running behind (to the south of) the station building. This would greatly reduce potential conflicts between cycles, pedestrians and buses. Behind the station building, a flat deck would extend over the platforms to accommodate cycle parking. This could be covered by a lightweight roof with integral solar panels. This arrangement for cycle parking would enable easy access for people of all abilities. The space, being open-plan, would feel safe and airy, and would have direct, level access to the station building.

It is essential that there is generous provision for parking ‘off-gauge’ cycles (cargo, trailer, tricycle and hand-cycle). All cycle parking racks must be secure, theft/vandal-proof and monitored by CCTV. Lessons must be learnt from Cambridge and Cambridge North stations.

There are legitimate concerns about the impact taxis (hackney and private hire) and private pick-up/drop-off cars will have on local traffic through the Biomedical Campus, Queen Edith’s and Trumpington. This station is likely to be an attractive railhead for people living in the south of Cambridge and nearby villages, being quicker and easier to access than Cambridge station, and having many more train services than Foxton or Shelford stations. Traffic modelling should allow for a significant shift of patronage from Cambridge station, and for future patronage growth to be faster than at Cambridge station.

The most critical question that the modelling must answer is whether additional peak-time traffic flows to and from the station will exceed the reduction in car traffic from modal shift from car to rail. The modelling must be run over short, medium and long time-horizons.

If modelling indicates that there will be a net increase in traffic, above the 25% reduction targeted by the Greater Cambridge Partnership (see Station capacity above), then careful consideration will need to be given to policies that can counteract this without displacing pick-up and drop-off to other locations, such as Long Rd, Lime Ave (Aura development) or Knightly Ave (Ninewells development).

The consultation diagrams indicate that there will be road access for taxis and private cars from Francis Crick Ave, which is currently restricted by a Traffic Regulation Order (TRO) to vehicles accessing the hospital. Do the relevant land owners support or oppose an update to the existing TRO to enable cars to access the station from the east? How will an amended TRO be monitored and enforced?

Vehicle access from the west requires significant land take and urbanisation of Hobson’s Park. We do not believe this is appropriate or necessary. We want the station to be designed to be easily accessible by bus, cycling and walking, with minimal need to access by car.

If not all trains stop at Cambridge South, then passengers making north-south interchanges (e.g. Cambourne to London or Royston to Stansted Airport) will mostly have to travel to Cambridge station, extending journey times by up to 14 minutes and adding to congestion of people on platforms and overbridge(s) there (see Table 2). There is therefore a strong case for having all trains stop at Cambridge South, which will require four platforms.

We suggest that four platforms, provided as two islands accessed from above, is the optimal arrangement, integrated with overbridges for pedestrians, cycles and buses (see Figures 1 & 2). 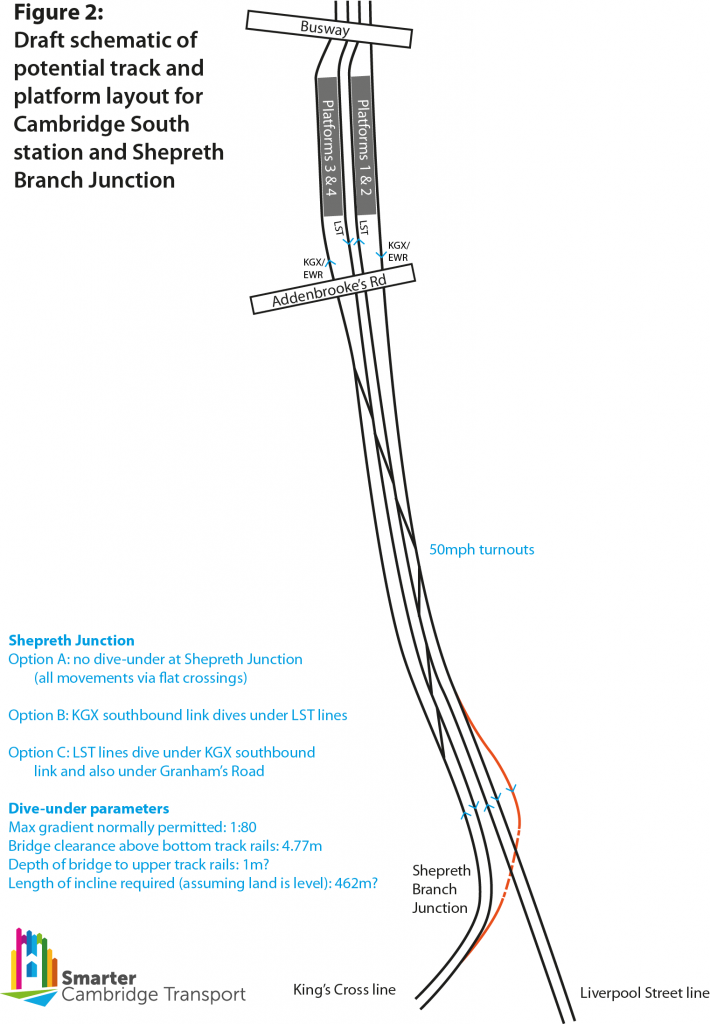 Although Network Rail’s priority will be to seek the most operationally efficient track configuration, we would like due consideration to be given to the passenger experience, in particular for those making north-south interchanges. If possible, we would like those to be cross-platform, rather than via the overbridge. Making tight north-south connections at Stevenage (which has a similar configuration to that proposed here) can be tricky, especially with luggage or young children. All north-south connections could be cross-platform with the track configuration shown in Figure 2.