S/0791/18/FL: Land between Cody Road and railway, north of Waterbeach

1. Smarter Cambridge Transport supports the relocation of the railway station as being the only practical way to improve access and facilities for the full range of users. It is of course imperative that the new station is safely accessible on foot, cycle and by bus from the existing village from day one, and that a disabled-accessible bus service through the village and connecting to the new station is guaranteed long-term.

1. Smarter Cambridge Transport neither supports nor objects to this application, as we believe it is premature to determine it before the Waterbeach New Town SPD has been completed and adopted.

2. On page 148 of the Design & Access Statement, the map indicates that the main access to the railway station from the A10 will be via the new town centre: 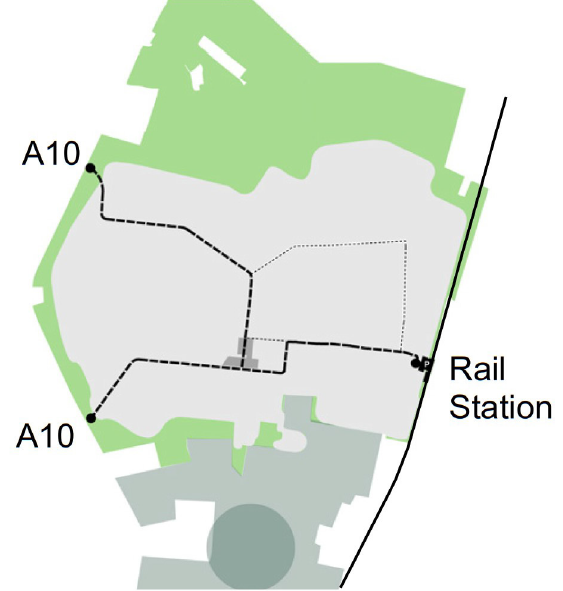 This is at odds with the Masterplan Framework (page 61), which shows a primary route running across the northern end of the development: 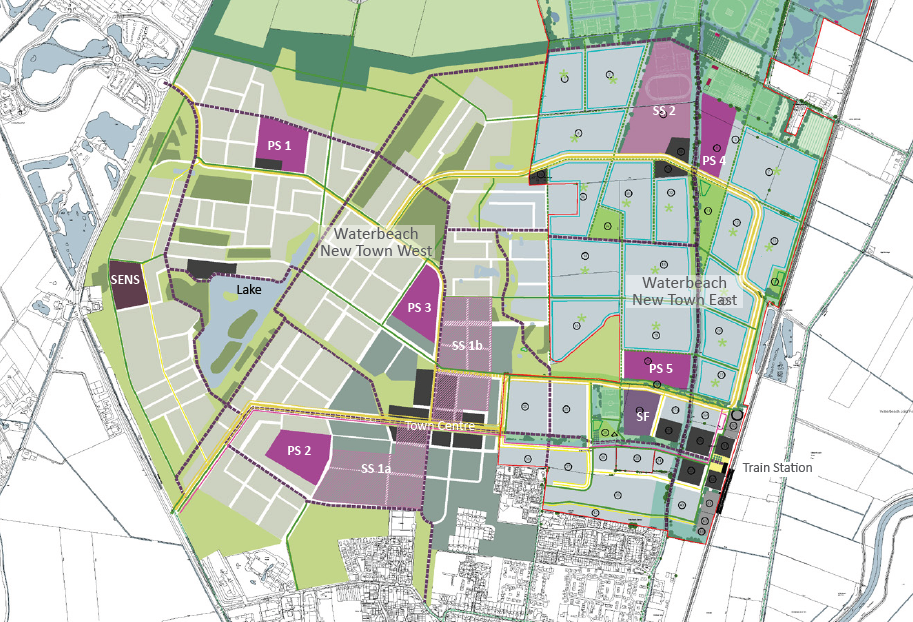 See Perimeter Road below for further thoughts on this.

3. On page 155 of the Design & Access Statement, a large number of bus stops are indicated: 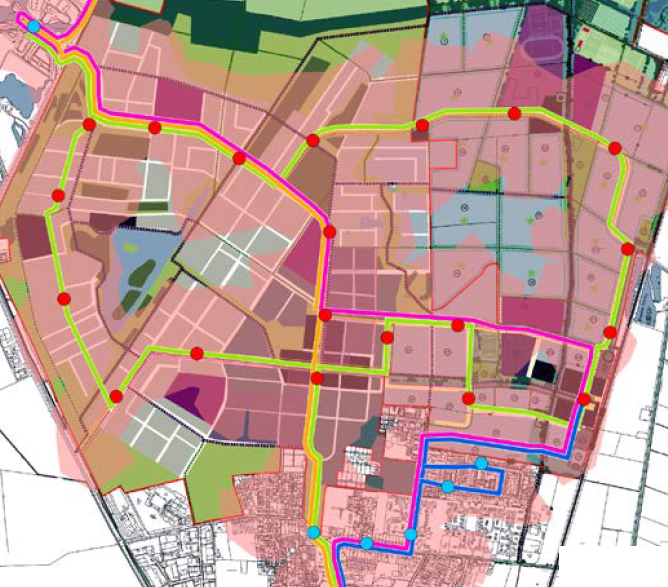 We also believe it is unrealistic to show four bus routes through Waterbeach, with almost all parts of the old and new town within 400m of an active bus stop. It is very unlikely that this will be possible on grounds of commercial viability. See Bus Stops below for further thoughts on this.

1. Smarter Cambridge Transport neither supports nor objects to this application, as we believe it is premature to determine it before the Waterbeach New Town SPD has been completed and adopted.

2. We support the objectives for Connectivity and Transport set out on page 70 of the Design & Access Statement, except for the concept of a ‘primary spine’, illustrated on page 132: 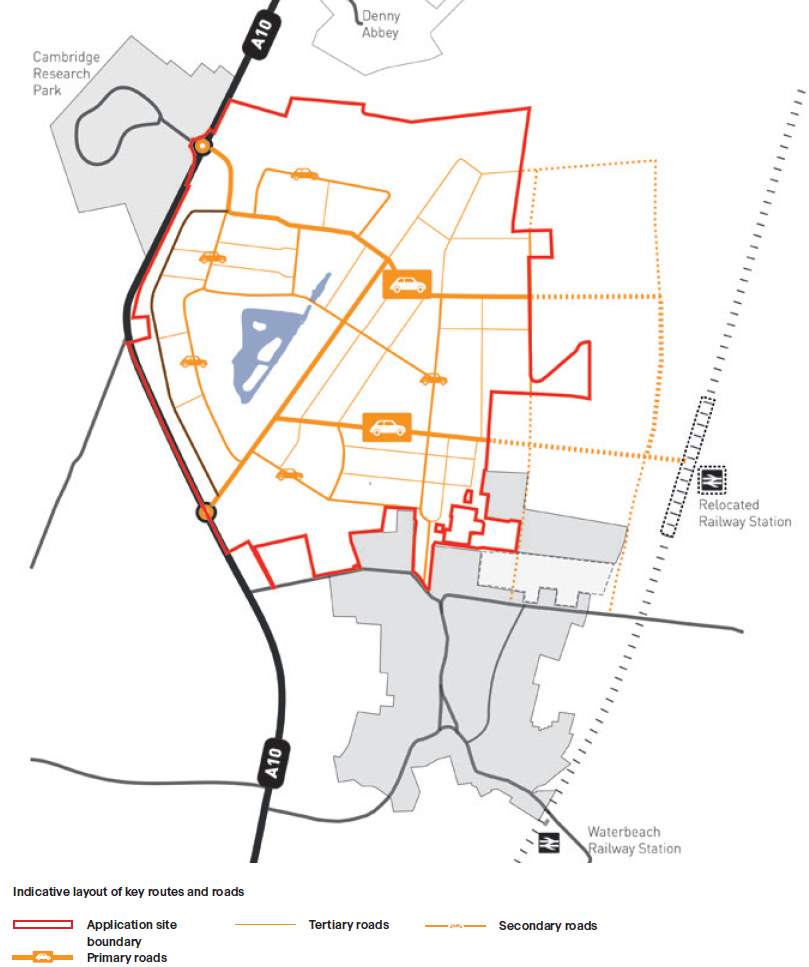 Designing primary vehicle routes through the middle of the new town undermines the ambition to promote walking and cycling for people of all ages and abilities, and thereby reducing car dependency. See Perimeter Road below for further thoughts on this.

3. The pattern of bus stops illustrated on page 139 of the Design & Access Statement cannot be served efficiently and therefore has little practical relevance: 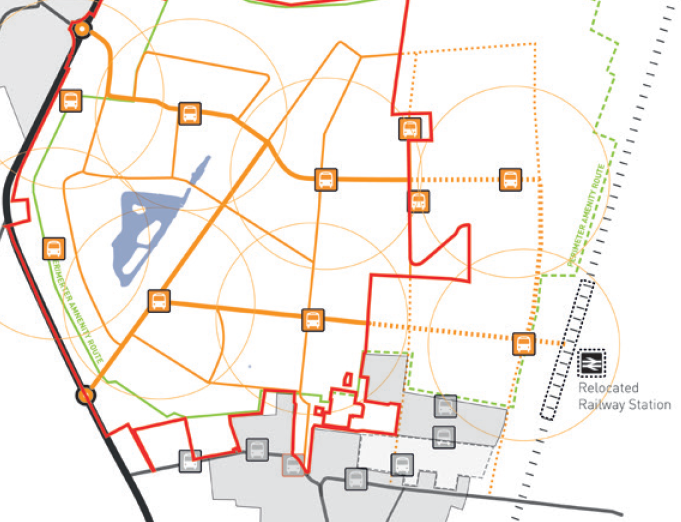 See Bus Stops below for further thoughts on this.

We note that the draft SPD shows the primary route through the centre of the new town (page 45): 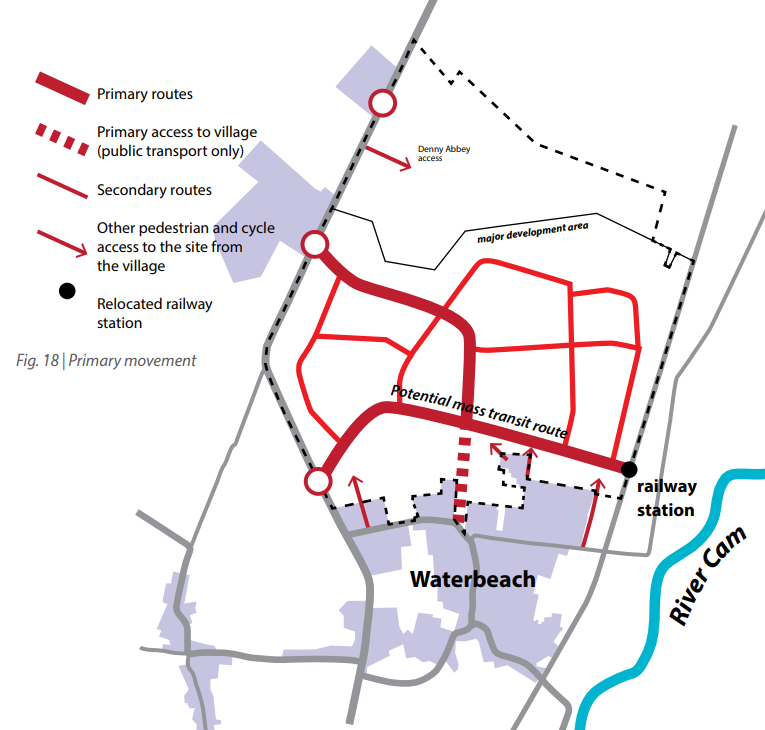 We believe this is a mistaken strategy, and goes against the better design intention set out in the Masterplan Framework for the eastern development (RLW Estates).

The main northern route between the A10 and the station will, at peak times, be busy with motor traffic. We would therefore like to see it interrupt as few cycle/footways as possible. This could be achieved by routing around the northern perimeter of the development, from the Business Park roundabout east to the railway line and then south into the station car park from the north. All other routes through the new town and into the existing village should be secondary routes for motor vehicles, with priority clearly given to walking, cycling and public transport.

It is neither likely nor desirable that scheduled buses will follow multiple routes through the development. To do so would guarantee an infrequent and unpopular service at most stops. It would be more honest and realistic to show a single bus route, from the Business Park, via the new station, and back to the A10 through Waterbeach village.

The bus route should be an integral design feature from the outset. The road layout along the route should facilitate access for buses and minimise conflicts. Each stop should be located adjacent to safe crossings. Cycle and walking routes should radiate out from stops, to provide highly visible, safe and direct routes to people’s homes.

We also suggest discriminating between ‘express’ and ‘local’ stops. Express stops are more widely spaced with a wider catchment area (in the order of 1km, rather than the 400m more typical for local stops). They are served by both local and express services, the latter following more direct routes, and offering significantly faster journey times. Express stops would typically have a shelter, bike racks and lockers, WiFi, etc.

Wider coverage may best be provided by unscheduled transport, such as demand-responsive or community minibuses.