Traffic patterns in Cambridge look significantly different from a year ago.

Daily car trips in Cambridge are still mostly below January levels: Perne Road, East Road, Hills Road and Cherry Hinton Road are 12–13% lower; Milton Road, 10%; and Coldhams Lane, 8%. Station Road is down 31% and Tenison Road 49%, mostly explained by fewer station pick-ups/drop-offs. However, traffic on Newmarket Road is up during the week. Evening peak flows are, in most cases, higher than last year on Tuesdays and Fridays. And on all days, it appears people return home earlier.

Car traffic is down 60% at the Parkside end of Mill Road, and 45% at the east end, owing to reduced station traffic and the closure of the bridge to general motor traffic. That looks to have caused a noticeable uptick in traffic on Station Road, Hills Road and Cherry Hinton Road.

The Grand Arcade and Grafton car parks are a little more heavily used than this time last year. Park Street is not quite so busy, and there’s no data from Queen Anne Terrace. The big change though is that Park & Rides are seeing roughly a third of the usage of this time last year. Some of that reduction will be drivers parking at public or employer car parks in the city instead.

Cycle traffic is much lower everywhere: 35% down on Hills Road and 23–24% on Milton Road, Cherry Hinton Road and East Road. It’s 41% down at the Parkside end of Mill Road, but almost unchanged at the eastern end, and 7–9% higher on Coldhams Lane and Vinery Road. Pedestrian and cycle traffic over the cycle/footbridge by Cambridge station are both down 36–37%.

If the reduction in cycle trips indicates how many people are still working from home or not working at all (furloughed or laid off), then the smaller reduction in motor traffic is probably owing to people shifting from bus and train to car. (Other theories are also available.)

If the still-upward trend in car traffic continues, evening peaks are likely to become increasingly congested. That will lead to worsening air quality and unreliable bus services. 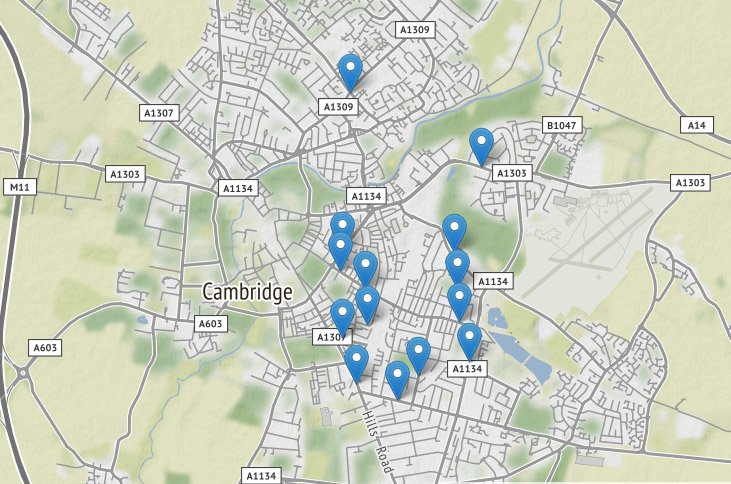 This article was first published in the Cambridge Independent on 21 October 2020.