Why we’re getting a Cambourne-Cambridge busway

You may have spotted the Greater Cambridge Partnership (GCP) battle bus sporting the slogan “Cambourne to Cambridge: Better bus journeys”. That’s because there is another round of consultation on options for a new bus route and Park & Ride site.
So what’s changed? Not a lot really: route alignments are more specific and include a tidal bus lane option; the Park & Ride site option at the A428-A1303 roundabout has moved west, and there’s a new option for consideration at the next junction west.

Meanwhile, back at the ranch, Highways England and the National Infrastructure Commission (NIC) have big plans for west of Cambridge. Dualling of the single-carriage section of the A428 between the A1 and Cambourne is expected to start in 2020. That forms part of the Oxford–Cambridge Expressway, which the NIC is calling to be completed by 2025.

The upgraded A428 will induce more traffic to Cambridge. That will create an even greater need for additional connections at the Girton Interchange if the extra traffic is to reach destinations off the M11 (the Biomedical Campus, research parks around the A505, and Stansted Airport). We have argued that ‘fixing’ the Girton Interchange should go hand-in-hand with building a major new Park & Ride site there.

Then there is East-West Rail, which is missing a link between Bedford and Cambridge. The NIC is calling on the government to commit to building and opening that by 2030. Though the route is likely to run closer to Royston than Cambourne, a parkway station on the A1198 will offer an attractive way to commute from around Cambourne and Papworth to the Biomedical Campus.

So, do you think building a new road or extra lanes for buses along the line of the A428/A1303 is the right way to spend City Deal money now?

No? Sorry, that’s the wrong answer. You maybe didn’t realise it at the time, but in 2014 you agreed to the County Council’s Long Term Transport Strategy. That sets out what GCP is now endeavouring to deliver. But can you spot the significant difference? 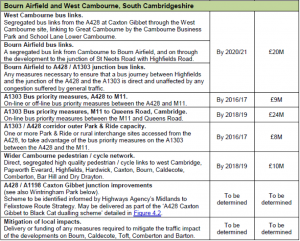 In the second part of this article I look at what we might do instead of all this.

This article was first published in the Cambridge Independent on 6 December 2017.