Will making the bus driver redundant save public transport?

Autonomous vehicles are coming – some day. In the Hype Cycle of product development, we’re just passing the Peak of Inflated Expectations and starting the descent into the Trough of Disillusionment, later to climb the Slope of Enlightenment to reach the Plateau of Productivity. 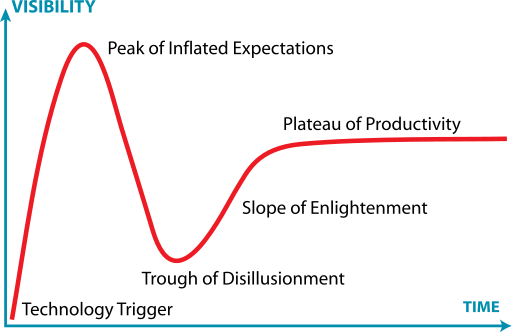 Most talk has been about autonomous private transport in the form of cheap taxis. This will make congestion much worse unless there is tight regulation to discourage people from switching from more space-efficient modes of transport. But what about autonomous public transport?

Bus drivers account for about 40% of operating costs. Changing the traction power from diesel to electric will save on fuel and maintenance. So, won’t autonomous electric buses be so cheap we’ll have them everywhere? (Recall that electricity from nuclear power was going to be “too cheap to meter.” That was heralded from the Peak of Inflated Expectations.)

But, are bus drivers human automata? Shifting the focus from engineering to social science, what do bus drivers do besides driving?
They collect fares. That can be done electronically.

They ensure people do actually pay. The operator of the Sheffield Supertram quickly discovered that, when the driver isn’t watching over people as they board, they ‘forget’ to pay (that happened in London too on ‘bendy’ buses). So, you need a team of roving plain-clothed revenue protection officers, empowered to levy fines on the spot.

Bus drivers with the right training look out for passengers in need, intervening when everyone else does their best Bystander Effect impression. Scratch the surface of social media and you’ll find first-person narratives, previously shared only with sympathetic friends, about harassment, abuse, touching up and intimidation experienced in the normal course of daily life by women, people from different ethnic and cultural groups, and disabled people. Someone in a uniform, even just by their presence, can keep predators at bay.

Drivers also deal with the unexpected: breakdowns, collisions, medical emergencies, and clearing up after someone’s sick. So, let’s hear it for the drivers. Even if a computer can drive the bus, it doesn’t mean we won’t need any staff on board.

This article was first published in the Cambridge Independent on 3 April 2019.