Smarter Cambridge Transport does not support any of the proposed options for expansion of Trumpington P&R or building a second site at Hauxton. We believe instead that the short-term focus should be on improving rural bus services; and in the longer term, to identify a single site to serve as a gateway to Cambridge for people travelling from beyond the local transport network (rail, ‘metro’ and bus) in South and East Cambridgeshire.

We do not believe that the existing site at Trumpington is appropriate for a P&R now that the village has enveloped it. It is a waste of valuable lane; it’s an eyesore; it’s an attractor of traffic and pollution into Trumpington village; and it contributes significantly to congestion and additional pollution on Hauxton/Trumpington Rd, especially in the evening peak, when vehicles exiting the P&R hold up traffic (including buses) on Trumpington Rd.

Expansion of the site would exacerbate all of the above concerns. It is not a satisfactory long-term resolution of the city’s transport needs.

We understand that it makes sense to site a second P&R on the opposite side of the M11 to minimise crossings and delays at the M11 interchange. However, this assumes that drivers arriving from the south and west will not aim for the Trumpington site in the early morning, filling that site before the peak. If that happens, then traffic from the north will have to cross the interchange and enter the Hauxton site.

Of the two options proposed for the public transport link, one is very expensive; the other will add a significant amount of time to the bus/metro journey, and create conflict with other users of the agricultural bridge, including people walking and cycling over it to avoid the interchange.

In the initial sifting of options, all four quadrants of the interchange were considered as possible sites. However, they were considered only as a complement to the existing site. They should have been appraised as solo sites too.

We do not support widening city roads to add bus lanes. The priority for city highways should be to create generous provision for walking and cycling, the most space-efficient modes of transport. A variety of techniques may be used in preference to bus lanes to reduce congestion and give buses priority over general traffic:

The A10 running through Harston carries an intolerable level of traffic for a village high street. The VISSIM video of the route is in no way an accurate representation of the current situation (see below). The data used for modelling the impacts of these changes needs to be opened to scrutiny. 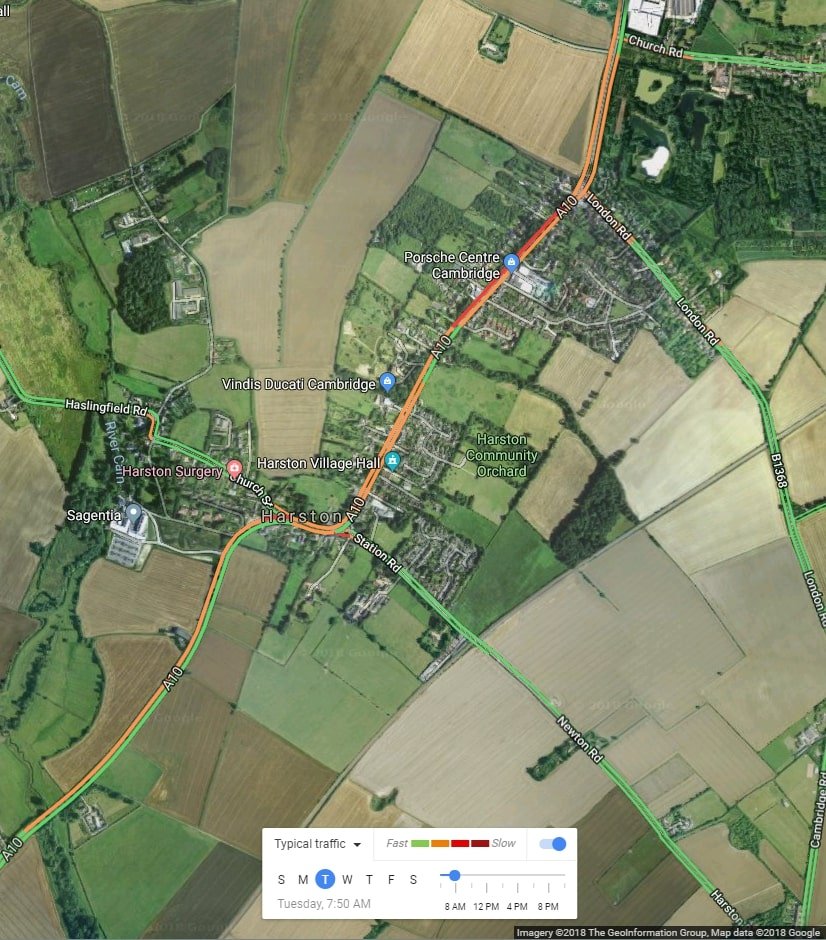 The combination of an attractive new Park & Ride, accessed directly from the A10 before the M11, and the planned grade-separated crossing of the railway at Foxton are likely to severely exacerbate congestion, pollution and safety for residents in Harston. This must be addressed now, not after there is a commitment to build the P&R.

What is the purpose of a Park & Ride?

This fundamental question has not been answered: who is Park & Ride intended to serve? The Combined Authority has made its position clear on Park & Rides: that they will undermine the attractiveness, viability and effectiveness of the planned ‘metro’. Substitute ‘rural bus services’ for ‘metro’, and it this assertion is just as true.

Academic and professional studies of Park & Ride have identified two unwanted side effects:

In other words, Park & Ride displaces congestion from Cambridge city to the necklace villages, and reduces the quality (frequency and hours) of rural bus services from rural Cambridgeshire into the city. We have seen how reduced patronage and increasing delays from congestion has gradually decimated rural services. The loss of rural bus services is exaggerating inequalities by cutting poorer people off from employment and social contact. Park & Ride serves only those people who have access to a car; compared with rural bus services, it is inherently socially divisive and reduces social mobility.

The headline ambition of the Greater Cambridge Partnership is to attract people away from space-inefficient private cars onto buses and cycles. That is best achieved by promoting a network of rural travel hubs, linking local, feeder, community and express bus services to major employment and other key sites in and around Cambridge.

Park & Ride sites around Cambridge should primarily serve people who cannot reasonably be expected to use public transport from closer to home. Sites should be close to the M11 and A14 so as to minimise localised congestion, viz:

GCP should publish all available data for scrutiny, including:

GCP should be identifying and delivering every possible ‘quick win’ to facilitate bus travel, walking and cycling to the Biomedical Campus, railway station and city centre.

Thousands more staff, patients and visitors will be moving on and off the Biomedical Campus each day as Papworth Hospital, AstraZeneca, Abcam, the new children’s hospital, and other sites open over the coming months and years. The need to facilitate access to the Biomedical Campus by space-efficient modes (bus, walking and cycling) is now not just urgent; it’s an emergency.

We set out a number of ‘quick wins’ in our response to the Cambridge South East Transport Study consultation that are relevant to this consultation. We urge GCP to act quickly on at least the following:

There is considerable misunderstanding about whether it is desirable to charge or not for parking at P&R sites. Though it does incentivise people to use P&R rather than driving, it also incentivises people to use P&R rather than their local bus service, undermining the viability of rural services. Parking fees are a vital source of revenue for local authorities: the £1 P&R fee raised £1.2m each year (which will grow as usage increases). Rather than subsidising parking, this money should be reinvested to support sustainable transport, e.g. to subsidise bus services that are not commercially viable, but which have significant social and environmental benefits.

GCP is currently paying £600,000 per year to the County Council to subsidise P&R parking; the County Council is paying the balance of about £600,000 to manage and maintain the P&R sites. This £1.2m is about two thirds of the 2018–19 budget for subsidising rural bus services in the whole of Cambridgeshire.

GCP should re-appraise the four possible sites around the M11 interchange as stand-alone Park & Rides, replacing the existing site at Trumpington. All options must be examined openly, honestly and objectively with the full participation of all stakeholders if they are to trust and accept the final decision.

The single Park & Ride site should have the following characteristics:

It should be served by a mass transit link with the following characteristics:

The combined cost of Park & Ride should be anchored to the cost of taking an express bus from a local travel hub in South and East Cambridgeshire, so that the perceived price difference favours the latter.

Any new Park & Ride on the A10/Hauxton Rd must be planned in conjunction with other planned changes along the A10, including a grade-separated crossing of the railway at Foxton. The implications of East-West rail should become apparent in the next few months. Other considerations include:

Expand parking provision at Meldreth station to balance demand with Foxton and intercept some car trips closer to Royston. Meldreth has a large catchment population and could serve Bassingbourn and the Barracks better than Royston station, which is highly constrained.

If growth in traffic on the A10 cannot realistically be suppressed in the long term by enhanced public transport alternatives, then plans must be developed now for a bypass around Harston, so that it can be factored into all other schemes along the A10, including a new Park & Ride site. Any such scheme must not create additional road capacity, which would induce more traffic and create new pressures in the road network.

Shortlisted options should include routes to the north and to the south of Harston. Of the possible southern routes, one we would like to flag up for consideration is to divert the A10 from Foxton along the south-east side of the railway to London Rd (B1368), which connects back to the A10. This would take traffic over the railway on the existing London Rd bridge, avoiding the expense of building a new one. Foxton station car park could be sited close to the station, just off the re-routed A10. We have not consulted with residents of London Rd, and so do not offer this as anything more than a design option for appraisal.

If the A10 were diverted in this way, the level crossing at Foxton could be retained as a disincentive to using it as a through route. A pedestrian/cycle underpass should be added to enhance local connectivity. Given the much lower height clearance required for a cycle underpass, this would be far cheaper and less disruptive than a road underpass.

When Cambridge South opens, there will be concern that it and Greater Shelford stations are impractically close together (from a railway operations point of view). One answer could be to open a new station on the Royston line at Little Shelford off Hauxton Rd. This would have a large catchment area, being under 15 minutes by cycle from homes in Great Shelford, Little Shelford, Stapleford, Hauxton, Harston and Newton. A good bus service connecting Sawston and the Biomedical Campus via Great Shelford would ensure residents of the Shelfords and Stapleford continue to have access to Liverpool St train services at Cambridge South station.