What’s at the top of the urban transport hierarchy?

The urban transport hierarchy is a generally agreed aspiration to prioritise walking over cycling over public transport over private cars. 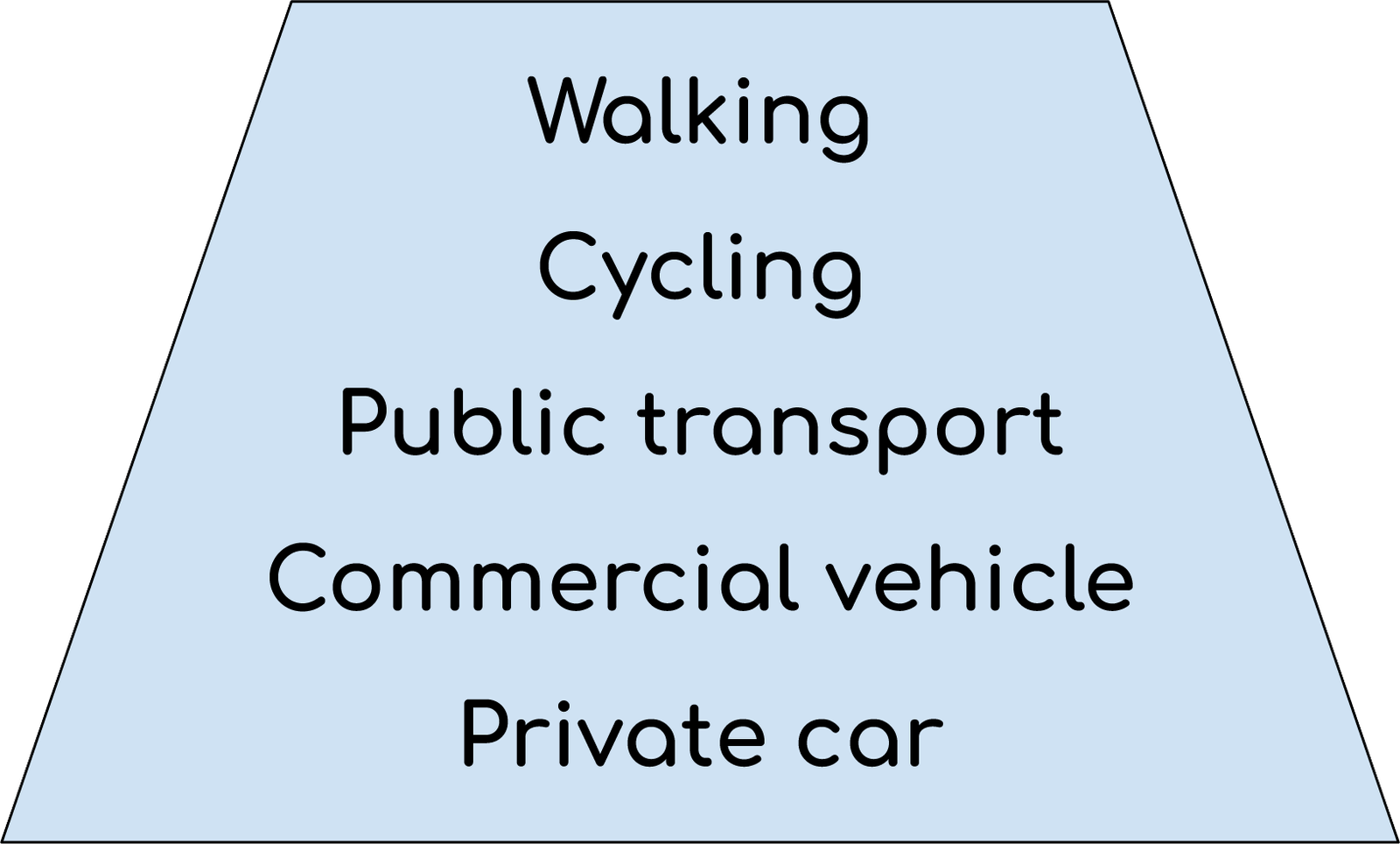 How closely do you think highway planners and engineers adhere to this?

Space has to be apportioned between carriageways, cycle lanes, pavements and verges. Time has to be apportioned between modes, e.g. to motor vehicles and pedestrians at crossings. These apportionments are determined by one factor above all: keeping the ratio of traffic volume to road capacity below about 85%. Safety improvements that threaten this are ruled out (until enough people die or suffer serious injury). A pedestrian crossing? Advanced green phase for cycles? Convert a vehicle lane to cycle lanes? Forget it. But isn’t walking and cycling meant to be at the top of the hierarchy?

Then there’s the challenge of prioritising buses over private cars. One solution is to assign a lane exclusively to buses (and, typically, taxis). But space is scarce in towns and cities that pre-date the motor car, so a bus lane typically takes space from cycling and walking. Bus users gain a small time-advantage relative to car drivers; people walking or cycling lose out on safety and ambience. But isn’t walking and cycling meant to be at the top of the hierarchy?

We can give buses priority in other ways, by allocating space on the edges of the city and using smart signalling within the city. Smarter Cambridge Transport has proposed several ways to do this, including opening a bus-only link from Milton Park and Ride via the ‘spare’ A14 underpass behind Cambridge Regional College.

We need to treat the urban transport hierarchy more seriously and genuinely prioritise allocation of space within towns and cities to walking and cycling.

There is also an important omission: space for trees, shrubs, hedges, ditches, flowerbeds and grass, to make streets more attractive and safer for walking and cycling. Ditches help prevent drains being overwhelmed in heavy rains. Trees keep places cool in summer and absorb pollutants. More than ever, for environmental, ecological and health reasons, they also need to be included in the urban transport hierarchy.

Let’s also consider money. Motor vehicles impose significant external costs on other people – the pollution, greenhouse gases, healthcare and welfare costs associated with collisions and low physical activity, noise, vibration, congestion and road wear. There is also the opportunity cost of allocating valuable land to roads and parking. Although owners and drivers of motor vehicles pay a very large quantity of tax, mostly in the form of fuel duty and VAT, it does not cover anything like the sum total of the external costs. The answer is to charge drivers to enter a Low Emission Zone or to drive at peak times (a congestion charge) or to pay a road price that varies with impact (e.g. size of vehicle, time of day, type of road). Any money raised this way could be used to support public transport services.

Together, these reallocations of highway space, time and money would help make the urban transport hierarchy a reality. 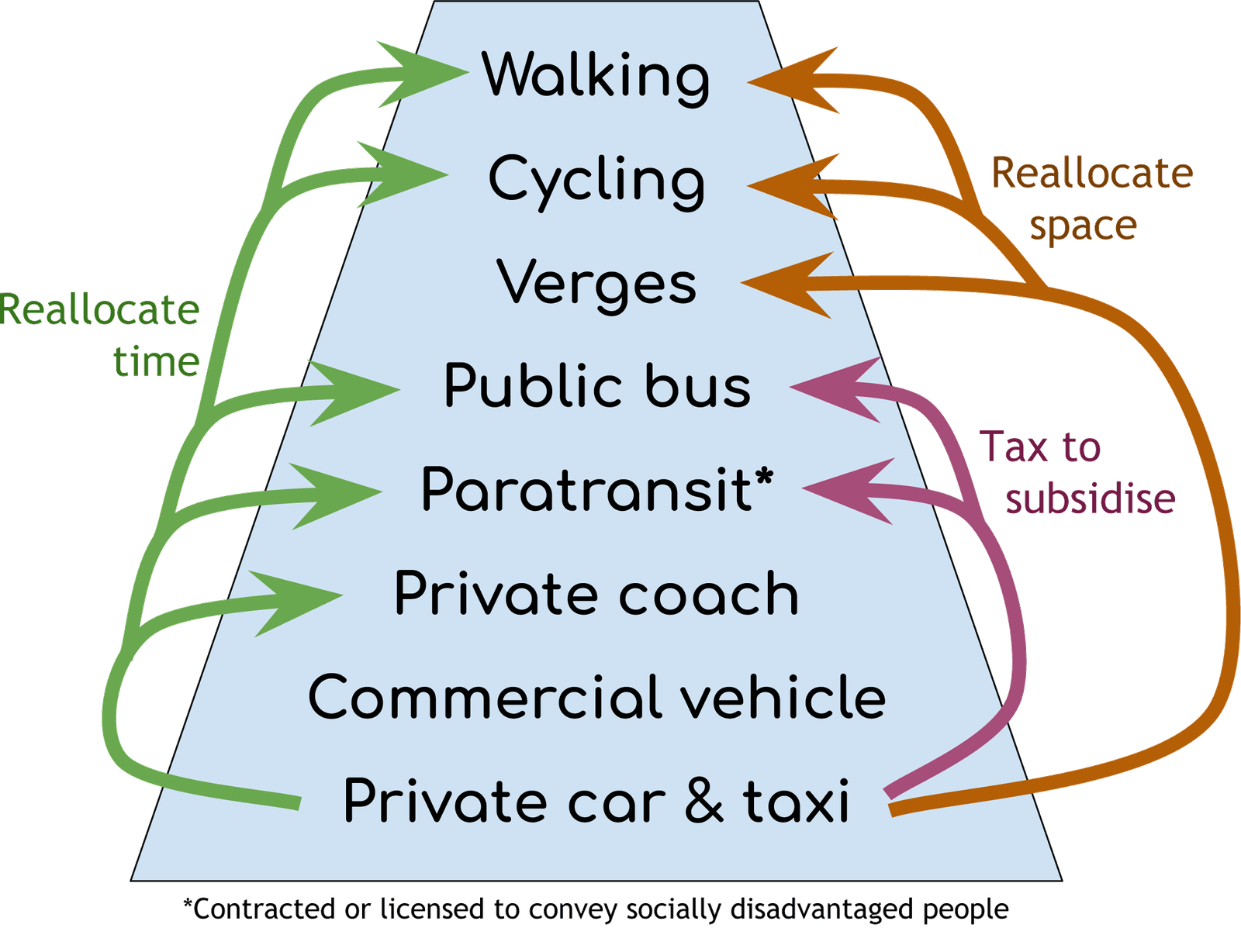 There is ongoing debate about whether taxis count as private or public transport. The argument for their being treated as public transport is principally that some disabled people rely on taxis. I would argue that this social service of taxis should be treated as a special case, in the same way that disabled drivers eligible for a Blue Badge are granted different privileges to other drivers. So, by default taxis would be treated the same way as private cars, with no special privileges or exemptions. However, when carrying a passenger with a Blue Badge, the taxi would be granted the same privileges and exemptions that a Blue Badge driver would. If that includes using restricted routes, such as bus lanes, then the taxi driver would need a way to register specific ‘Blue Badge’ rides with the enforcement agency and record some proof of this.

In short, taxi rides that count as a social service would come under paratransit, which includes Dial-a-Ride and other community transport schemes.

The transport hierarchy is typically illustrated as an inverted pyramid, perhaps in an effort to signal relatively how much space each mode should be allocated. Since this is neither accurate nor realistic, I prefer to use a pyramid to mean simply that a higher position signifies greater importance.

A shorter version of this article was first published in the Cambridge Independent on 8 May 2019.